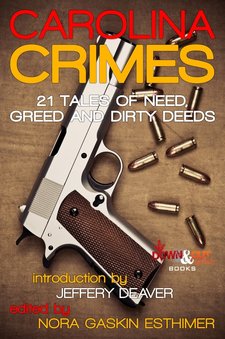 ​Carolina Crimes: 21 Tales of Need, Greed and Dirty Deeds is a collection of short stories by crime writers living in North and South Carolina, members of Sisters in Crime. The Triangle (Chapel
Hill, Durham, Raleigh, NC) Chapter of SinC issued the challenge to members to write stories about addiction or obsession and crime. Who knew that the responses would be so varied or that ice cream,
a game of Solitaire, or silk fabric could provide motives to commit murder? Or that golf clubs, stiletto-heeled shoes, and microwave ovens could provide the means?

These stories remind us why we love crime fiction, and why it matters. They provide us with the cold revenge of imagination, the hot passion someone could kill for, and the sense of justice a community demands. They remind us we never know exactly what our next-door neighbor may be capable of, or for that matter, what we ourselves harbor in the deepest corners of our hearts and minds. The humor is dark. The suspense is shudder-producing. The horror delivers goosebumps. And by the time we turn the last satisfying page, we know more about what it means to be human.


“The Carolinas boast some of the finest crime writers ever to set ink to paper and pixels to disk, as this Sisters in Crime anthology attests. Just like a Carolina Sunday supper, these stories dish up a variety of styles, tones and tastes, from procedurals to cozies to dark psychological thrillers. Pour yourself a tall sweet tea or a couple of fingers of bourbon, sit back and dig in.” —Jeffery Deaver


SNEAK PEEK AT WHAT'S INSIDE

Get your copy at Down and Out Books, online retailers, or your local bookstore.