Karen McCullough - A Gift for Murder 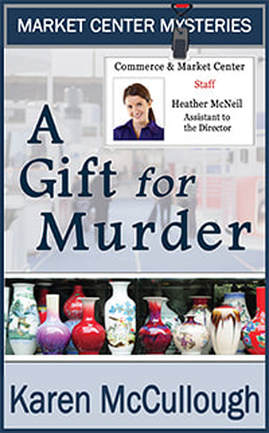 Click for website
For fifty-one weeks of the year, Heather McNeil loves her job as assistant to the director of the Washington, D.C. Commerce & Market Show Center. But the Gifts and Home Decorations trade show, the biggest show of the year at the center, is a week-long nightmare. This year’s version is being worse than usual. Misplaced shipments, feuding exhibitors, and malfunctioning popcorn machines are all in a day’s work. Finding the body of a murdered executive dumped in a trash bin during the show isn’t. The discovery tips throws Heather’s life—personal and professional—into havoc.

The police suspect the victim’s wife killed him, but Heather doesn’t believe it. She’s gotten glimmers of an entirely different scenario and possible motive. Questioning exhibitors about the crime doesn’t make her popular with them or with her employers, but if she doesn’t identify the murderer before the show ends, the culprit will remain free to kill again.

Her only help comes from an exhibitor with ulterior motives and the Market Center’s attractive new security officer, Scott Brandon. Despite opposition from some of the exhibitors, her employers, and the police, Heather seeks to expose the killer before the show ends. To solve the mystery, she will have to risk what’s most important to her and be prepared to fight for answers, her job, and possibly her life.

A Gift for Murder is available from these retailers:
Amazon
Nook