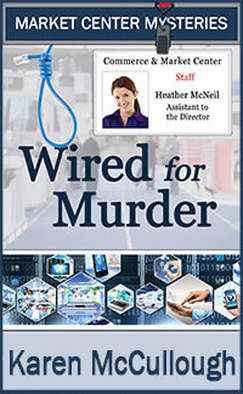 Click for website
Greed, jealousy, and anger often lurk below the surface of trade shows and business exhibitions, but murder isn't usually on the program.

Heather McNeil, assistant to the director of the Washington DC Market Show Center, handles many of the day-to-day issues that arise during the shows, exhibits, and conferences being held there. The first day of the Business Technology Exposition provides her with plenty of opportunities to demonstrate her skill at settling disputes, refereeing arguments, and even breaking up fights.

When the president of industry-leader MegaComp has a very public argument with a man who accuses the company of stealing an important technical concept, she watches it but doesn’t have to intervene. Later, though, the accuser returns a phone call from Heather, and she becomes an unwilling audience to his murder.

Heather is more than happy to leave the investigation to the police, but she’s the person everyone talks to and she soon learns more than she wanted to know about the victim and all the people who didn’t like him very much, including several who might have motives for murder.