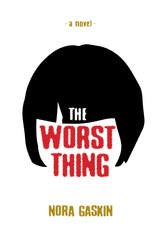 When Kellah Mace’s parents are killed in an accident—when Kellah is fifteen years old—she overhears someone say, “She’ll go through life knowing the worst thing has already happened.” Kellah, numb from loss and grief, takes these words to mean she need fear nothing. Only one thing can hurt her again: the loss of someone else she loves.

The Worst Thing begins with the intense friendship of Kellah and Angel, forged on the window ledge outside of their rooms at boarding school—and in the mirror during a hair-cut makeover.  After high school, these intrepid young women move to an apartment in the city. Kellah goes to college where the library is her refuge. Angie jumps into a modeling career and quickly becomes the newest super model. They remain bonded, looking out for each other, supporting each other, until a stalker’s shadow falls across them. Albert Darwin, called Ape by acquaintances, has a story of his own. He was a frightened little boy, grown up to be a desperate man, and when he enters their lives, he brings a new meaning to “the worst thing.”

The Worst Thing is available at Amazon and through most bookstores.